Style: A prominent exponent of the Ukiyo-e style, Harunobu was responsible for the first full-colour prints

Harunobu was destined to be a true master of Ukiyo-e. At an early age he studied in the Torii school and possibly learnt from the master printmaker Nishikawa Sukenobu. His early work was of no real distinction until he was commissioned by a group of poets/artists to illustrate a calendar which they then distributed around Edo' many parties and gatherings.

Harunobu' 'new-look' was an instant success with the affluent merchant class of the city, his use of multiple colours was new and innovative. He was also the first artist to consistently use more than three colours in his work, creating the nishiki-e style.

Harunobu drew his inspiration, like all Ukiyo-e artists, from life centered around the pleasure districts of Edo. But his work not only included the common subjects of courtesans and actors, he also depicted other 'less used' professions such as street vendors, wrestlers and errand boys.

Whether his prints contained images of courtesans of street life, Harunobu's depiction of figures was quite distinct. All his figures are tall and thin, with a grace and style that give them an almost child-like feel. Even his male figures have this feminine feel to them. Like most of the Ukiyo-e artists Harunobu also produced many shunga images.

Harunobu was also the first artist to depict scenes at night and during snowfall. In his career Harunobu produced between 700-1000 prints, over 20 books and many paintings. Unfortunately Harunobu died young at the age of 45. 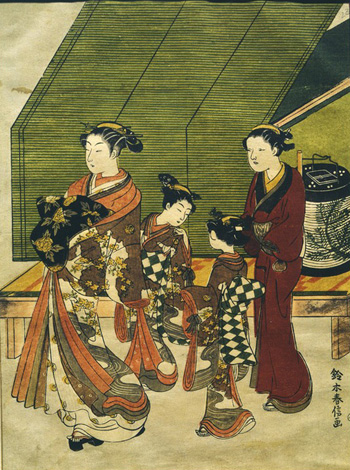 an early example of the nishiki-e style 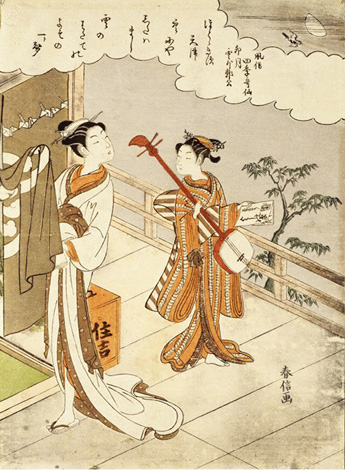 A Courtesan and Attendant on a Moonlit Veranda

a courtesan living in the Yoshiwara, the licensed prostitution quarters in Edo, now central Tokyo 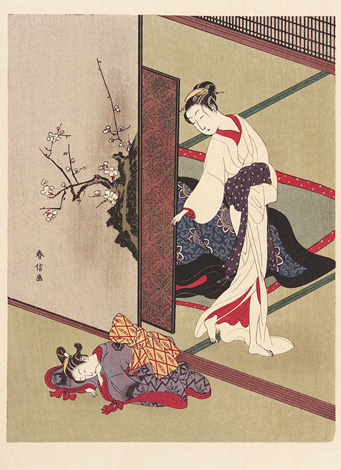 a fine example of nishiki-e 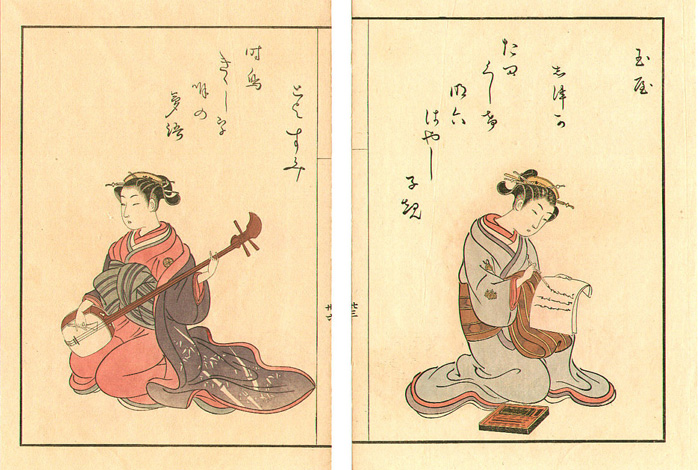 image from an ehon illustrated book

an interesting composition with varied colours