Hokusai was born on the 23rd day of 9th month of the 10th year of the Horeki period (October or November 1760) to an artisan family, in the Katsushika district of Edo (Tokyo), Japan. His childhood name was Tokitaro. It is believed his father was the mirror-maker Nakajima Ise, who produced mirrors for the Shogun. His father never made Hokusai an heir, so it's possible that his mother was a concubine. Hokusai began painting around the age of six, possibly learning the art from his father, whose work on mirrors also included the painting of designs around the mirrors.

Hokusai was known by at least 30 names during his lifetime. Although the use of multiple names was a common practice of Japanese artists of the time, the numbers of names he used far exceeds that of any other major Japanese artist. Hokusai's name changes are so frequent, and so often related to changes in his artistic production and style, that they are useful for breaking his life up into periods.

At the age of 12, he was sent by his father to work in a bookshop and lending library, a popular type of institution in Japanese cities, where reading books made from wood-cut blocks was a popular entertainment of the middle and upper classes. At 14, he became an apprentice to a wood-carver, where he worked until the age of 18, whereupon he was accepted into the studio of Katsukawa Shunsho. Shunsho was an artist of ukiyo-e, a style of wood block prints and paintings that Hokusai would master, and head of the so-called Katsukawa school. Ukiyo-e, as practiced by artists like Shunsho, focused on images of the courtesans and Kabuki actors who were popular in Japan's cities at the time.

What really motivated the development of my artistic style was the embarrassment I suffered at Shunko's hands.

After a year, Hokusai's name changed for the first time, when he was dubbed Shunro by his master. It was under this name that he published his first prints, a series of pictures of Kabuki actors published in 1779. During the decade he worked in Shunsho's studio, Hokusai was married to his first wife, about whom very little is known except that she died in the early 1790s. He would marry again in 1797, although this second wife also died after a short time. He fathered two sons and three daughters with these two wives, and his youngest daughter Oyei eventually became an artist like her father.

Upon the death of Shunsho in 1793, Hokusai began exploring other styles of art, including European styles he was exposed to through French and Dutch copper engravings he was able to acquire. He was soon expelled from the Katsukawa school by Shunko, the chief disciple of Shunsho, possibly due to studies at the rival Kano school. This event was, in his own words, inspirational, "What really motivated the development of my artistic style was the embarrassment I suffered at Shunko's hands". Hokusai also changed the subjects of his works, moving away from the images of courtesans and actors that were the traditional subjects of ukiyo-e. Instead, his work became focused on landscapes and images of the daily life of Japanese people from a variety of social levels. This change of subject was a breakthrough in ukiyo-e and in Hokusai's career. Fireworks at Ryogoku Bridge (1790) dates from this period of Hokusai's life. 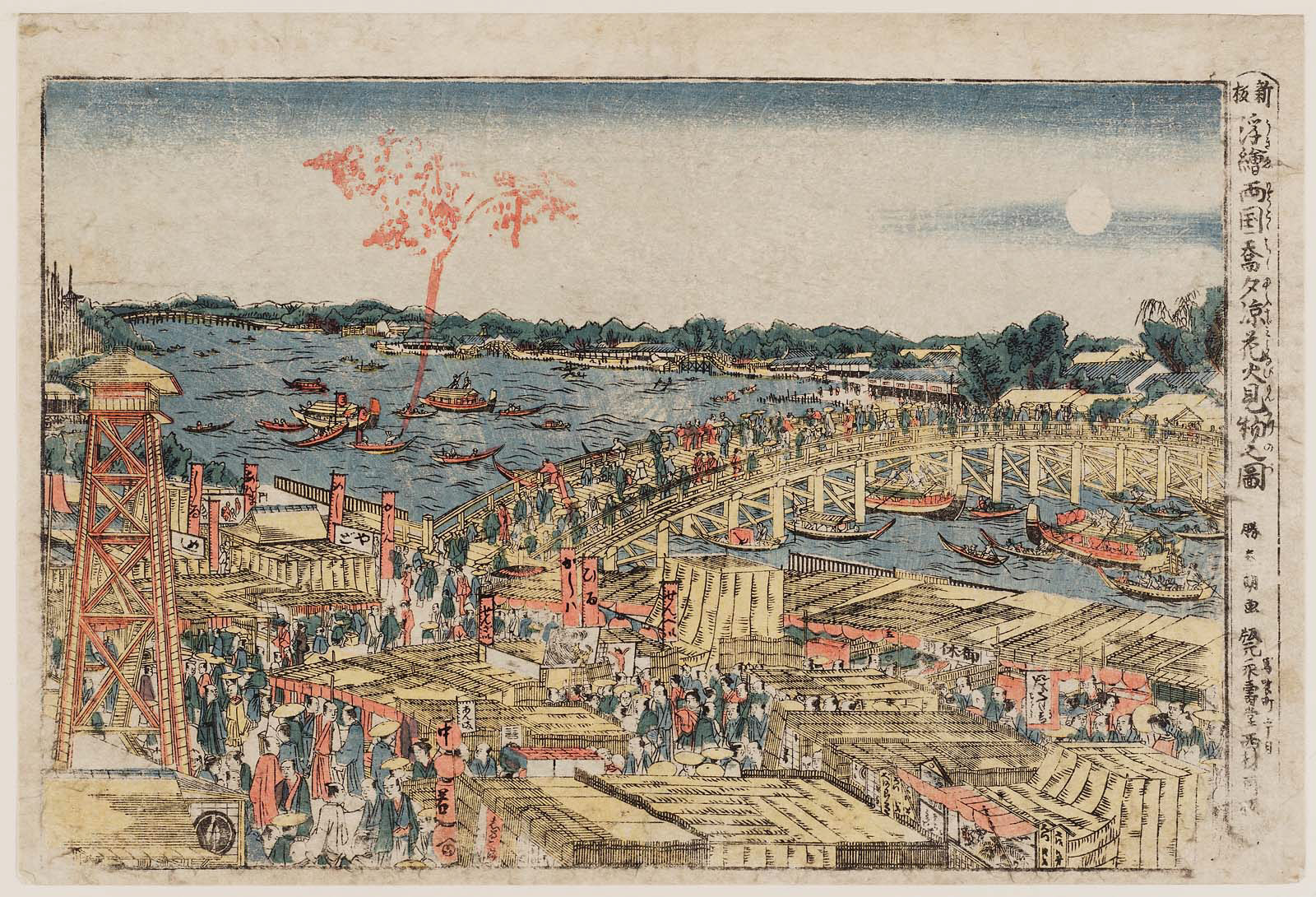 Next: Height of His Career >

* top image: Okazaki, from an untitled series of the Fifty-three Stations of the Tôkaidô Road c1804
© Museum of Fine Arts Boston